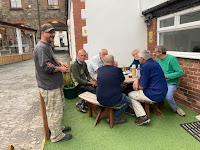 The photo shows us enjoying burgers and refreshing ale after five games of skittles. The staggering news is that Andy was the best player of the night emulating his wife Louise who won that trophy at the last session, but Andy won it in a different way!, he only played one game, ( work that one out folks !, Chris's team were the team winners at the night.

Much enjoyable chit chat went on at the table whilst eating our burgers where the whole world was put right, why don't they listen to us guys?.

Many thanks to Chris for setting it all up and well done to those who turned up, I only wish we could attract more people to the club nights. It was a shame that the weather stopped our evening meet at Chulmleigh on Thursday, let's hope that the next evening ride on the 20th June is a better weather scenario.

Now our next ride is the 12th of June, it is a much delayed run to remember our long serving Devon section stalwart Ray Rowcliffe, it is hoped that his son Graham will come down from Swindon to join us, we meet at the Morrisons car park on Kennedy way in Tiverton, lunch will likely be in Mortonhampstead which was Ray's home for his early years, I have yet to finalise the route but Graham has promissed to take over after lunch for a while to pass take us past where Ray lies at rest. 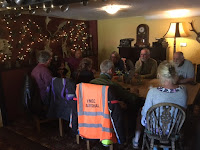 11 riders turned up in excellent weather at the Cook Island Inn at Mullacott cross for this our annual Scrumpy run. The run was to have been lead by our esteemed secretary Chris but as he is suffering the remaining effects of covid, it fell upon the capable hands of Andy to take over. Two new riders were evident, one a learner, but she proved quite capable throughout all the twists and turns that faced us during the day and should have no trouble taking her test next week, good luck gal!. 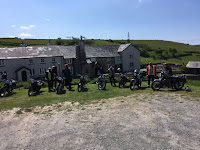 The run set off at 1100 after a briefing from Andy with a warning of loose gravel around Combe Martin. All went well until one of our new riders on a hybrid machine, locked up its back wheel brake, he insisted he could sort it and would meet us at the Blue Ball which he did. After a very good meal at the pub where Andy decided on a vegetarian burger but when the waiter came he found himself saying 'steak and ale pie please!' ( I think he needed the meat for the afternoon run!). 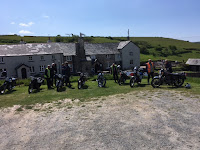 The afternoon run passed pleasantly enough with variations between main road and grass up the middle lanes to arrive back at Quince Honey farm to finish.

Many thanks again to Andy and to Nick who 'volunteered' to cover the back marker duties with me. Now, the next trip out is on the 18th at the Red Lion in Chumleigh from 1800 then the following evening is club night for burgers and skittles. 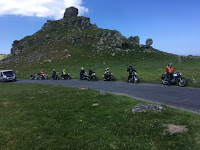 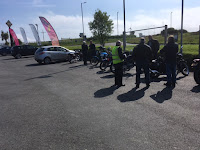 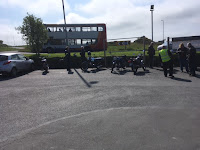 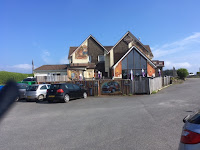 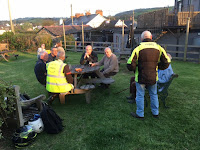 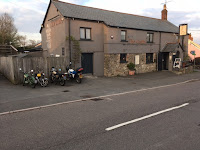 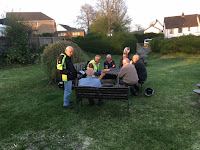 The Castle Inn at Landkey proved to be a great choice for an evening meet for a natter, the weather was excellent and sitting in the beer garden was an added bonus. People rode all sorts of distances to get there, some only riding a few yards whilst it was nearly 30 miles for myself. We began to arrive around 1815 and people stayed as long as they were able bearing in mind that some of these elderly bikes don't have very good lights. There would have been more than the 10 present had Andy's Triumph not required fettling first and then his mate on a Harley lost drive due to a broken drive belt, ( Andy tells me he had been rude about Triumphs before this happened )!.

Now Chris tells me that he has been in touch with the Welcome Fryer re our fish and chip night on the 30th of this month, it seems they only do take away on a Saturday but would open the restaurant for us if there were enough numbers, so please contact Chris or myself if you definitely would attend and in what numbers..

Our next run is May 8th starting from Mullacott cross at the usual time, this is our famous Scrumpy run ( sorry no scrumpy is involved! ), see you there. 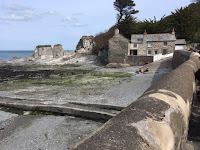 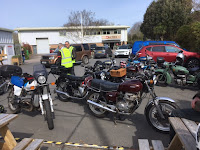 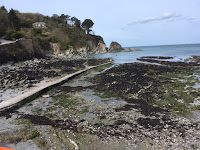 13 riders were involved today with this our first run of 2022, it was Nick that put his hand up to organise and lead from ‘the Quay cafe’ in Braunton, ( I’m sure I warned him never to volunteer! ). The weather was cold to start but dry with the sun showing itself during the day. It was nice to see new riders to us and a couple we have not seen for a while, also Maurice on his first ride out since his heart procedure and Andy arriving on his Sunbeam to see us off after his arm op, ( unfortunately he had to bump start his bike but I checked later in the day and he was ok ). Nick lead us out dead on 11am with Chris and I doing duty at the rear, at a good steady pace past Saunton, Croyde, Georgeham and on to Woolacombe, Ilfracombe to our lunch stop at Blackmoor Gate at the Old Station Restaurant.

We saw that the roads were fairly busy and the beaches and coasts were well filled, there were thankfully no breakdowns though tie wraps came into use on a Triumph and Nick picked up his partner in Lee Bay.

After a great Buffett meal, we set off again to South Molton, Bishops Tawton and finally Barnstaple.

Many thanks to Nick who did very well on his first lead, now there will be a meet in Landkey on the 20th at ‘the Castle’ and it’s club night on the 21st where we will learn about our clubs finances. 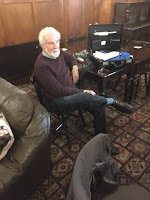 Apologies all for the time it took to write this club night up, it was down to a number of factors not least that since apples' latest software update, I don't seem to be able to transfer photos to my pc without posting around the world first!.

Excellent evening was enjoyed by those of us who were present culminating in Chris' quiz of 25 questions which our team won earning us a packet of non fattening choccy bars!. Reminisces of bikes we have got rid of but now wish we hadn't amongst the chat.

Now guys our first run of the year is on the 10th April known as the April fools run, so be a fool and come and support us, see you there!. Thanks to Chris for the quiz, I know how he likes to see us squirm!. 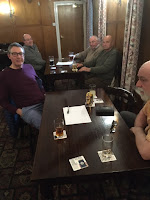 Maurice has rung today asking me to share with you the news that he has heard from the DVLA to say he may start driving and riding again, he thanks everyone for their sympathy since losing his license and will now come on runs when suitable.

Andy has sent some photos from the recent Hidden valley meet, he says more bikes would be welcome 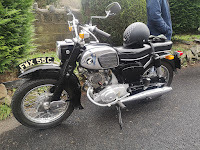 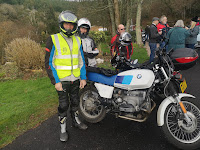 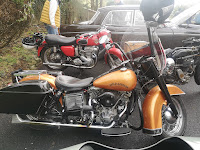 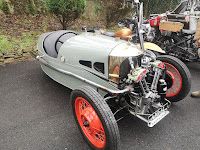