The first ever Scrumpy Run started from Sidwell Street in Exeter in 1973. Some forty-five entrants took part in the run which, by a roundabout route, took them to the lunch stop at Colyton where this photo was taken. 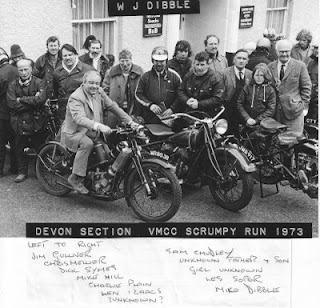 Later Scrumpy Runs started at Ilfracombe. Initially the machines were lined up by the putting green in front of the Pavillion. However, as numbers increased the parade was moved to the promanade in front of the old Pavillion where it is still held, although the old Pavillion has now been removed.This photo shows Eric Lewis chatting to Les Rowcliffe and his son Ray by the putting green. 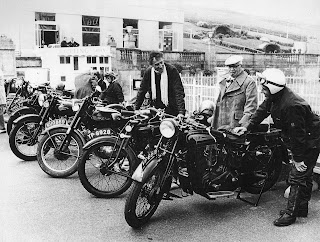