I was unable to take part in the Autumn run this year and neither was Gordon. I can only report what I have been told of the run. It seems that everyone had a good day despite the fact that one rider deserted his post before the tail end marshals arrived. The run finished at Exmouth where large portions of icecream were consumed.
Our thanks goes to Brian for organizing and leading the run and to Den and Shirley for providing the pre-run breakfast.
Congratulations to Tony Petherick for winning the Highway Code quiz.
Steve Griffen won the Best Tele-fork bike with his 1949 BSA B31, and Mick Glossop took the award for Best Girder Fork bike with his lovely 1938 Royal Enfield Model K. 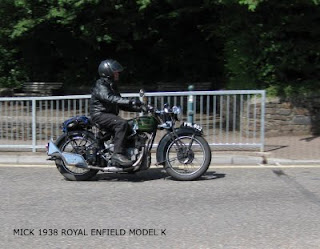