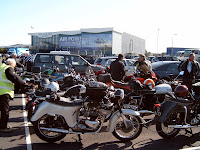 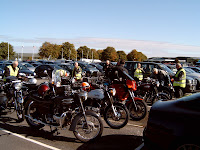 Nine of us assembled at the Junc 27 rest area and signed on in perfect weather for the run to the Fleet Air Arm museum at Yeovilton. Gordon offered a suggestion of three possible routes but all decided to follow him!.
We set off at 10.30 taking the B3181 towards Wellington, then
climbed up over the monument and on over the Blackdown hills until we arrived at the A303. Here we turned left and followed the A303 to the turning for the Museum.

We were parked in the car park, by attendents, where we found three of the Bristol section who had travelled down to be with us for the day, we also were met by a member of the South Dorset section.

Gordon did his best to try to get a few pounds off for a party of 13, but despite tears and begging, we had to pay normal ( o.a.p. ) rates, however, it was soon clear to us all that the visit was well worth the money as we had flights in helicopters onto a carrier and were able to see aircraft launch and be recovered, ( oh alright so it wasn't real but it certainly was made to feel like it ).

We all got back together at 15.00 and Gordon led a different route back through Huish Episcopi and Langport then Taunton where people began to break off for their respective trips home.

All in all a good day out in good weather, good routes, good company and a good venue