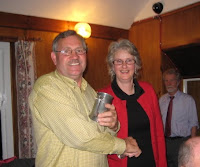 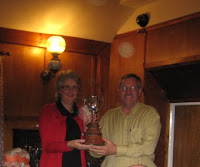 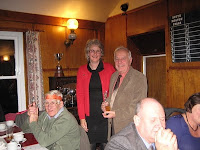 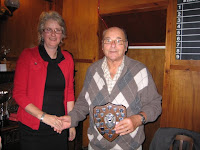 This years dinner was held at the club-night venue, the Town Arms, South Molton.
Our fears that the room might be too small to accomodate the 38 people who booked proved to be unfounded. It was cosy but fine. The meal provided was good value for money, and was popular with dog owners because the quantity of meat provided defeated most diners.
This years awards went to he following:
Jean's Trophy for most points on a Pre-war machine went to Ray Rowcliffe.
Lee Plain won the Ron Ley Cup for the Best Effort on the Scrumpy Run and the Thelbridge Trophy for the Best Girder-fork bike on the Autumn run.
The Woodman Shield for knowledge of the highway code was won by Rodney Hann.
The Reed Motors Tankard for Best Tele-fork Bike on the Autumn run went to Brian Cordy.
Ian Bryant was awarded the Les Soper Tankard for most points on a Non-British machine.
The VMCC Cup for most points on a Post-war Machine was won by Brian Cordy.
Maurice Ley was presented with the Scrumpy Run Shield and the Ilfracombe Shield which he won at this years Scrumpy Run.
There were plenty of prizes for the raffle and one persons luck was really in that night. I am still waiting to hear if he won the National Lottery as well! I thought it was a very good night and hope everyone else enjoyed it too. A good end to a successful club year.
Happy Christmas everyone and a peaceful New Year.