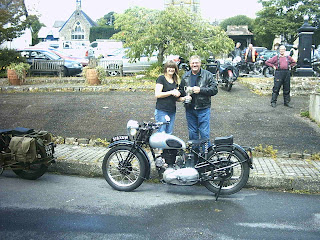 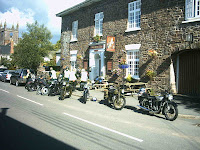 13 riders assembled at 'The Mitre' in Witheridge for this girder only run. It was nice to have support from Mike Williams a committee member from the Dartmoor section, also to see the Harley and Morgan on the run. Bill was our leader for the day despite having some problems with his usually trusty Norton, and Brian took on the tail end role for the day. We had a great send off from the Mitre and took the road back towards Tiverton. The route then turned back towards South Molton and ended the morning at Chittlehampton for a very nice lunch, some problems were encountered but all arrived safely. Brians Triumph won the cup having been selected by our hostess. Rain showers gave us a bit of trouble in the morning and did threaten the afternoon but it just got better and all arrived at Winkleigh in the dry. Thanks to the organisers, the Mitre and the Bell inn for looking after us well, also a mention to some club members who turned up to see us off, finally a personal thanks to Ray who entrusted his Ariel to me so that I could join this run even if I wasn't allowed to start it !.