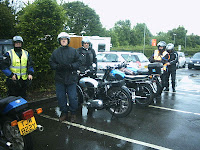 The weather was wet with rain promissed all day, I had already received apologies from good supporting members who were otherwise involved for the day so I rode out to Junction 28 of the M5 with little hope of seeing anyone else turn up, but there were 3 bikes already on site with another 2 soon following.  A discussion with those present with me explaining where we were going on this my route led a vote to 'press on'. Tony got to wear a red marshals jacket at the rear for the first time and off we went, me obviously leading. 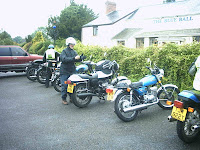 The route took us towards Honiton as far as Colliton where we turned off to climb through Broadhembury towards Dunkeswell and on to Smeatharpe, both sites of airfields during the 2nd WW, in fact at the lunch time stop, Brian told us that his Dad was a gunner stationed at Dunkeswell. We turned towards Blagdon then swung across the spine of the Blackdowns passing Wellington Monument to our lunch stop at the Blue Ball. This route is a wonderful run when it's nice and sunny but the guys seemed to enjoy it so we tucked into lunch in good spirits.
Rain picked up a bit so the afternoon run carried on through Tone Vale
to bring us out at the back of Wellington, then on to Milverton and Wiveliscombe, here instead of turning up towards the two big resevoirs, Clatworthy and Wimbleball, by mutual agreement, we continued on to Bampton where the North Devon guys carried on and Brian and I turned off for Tiverton and Exeter.
A big well done for the guys turning out, this is the 2nd year running that the Ron Ley run has been very wet, we are overdue a dry one next year.