The club nights for January and February have been a great start to the year, Keith brought a film of the 2009 motorcycle show to the January club night for us to view and comment on, there were a number of 'hybrids' shown such as the Triton and commentary by the builders and riders - very interesting. Februarys club night was a very enjoyable presentation by Dermot on his 25 year restoration of a 1918 Daimler, it was initially recovered from a scrap yard and towed all the way back to his home by a small van!. Dermot soon disposed of the body and, as work progressed, had a much more suitable body beautifully made to fit. We learnt much about the engine, clutch, brakes and chassis, he tells us that a purchaser would have paid some £1025 just for the chassis etc which would have then been despatched to a bodybuilder for a body of choice, this of course was a considerable sum in those days, again a very enjoyable evening for the 22 members present, thanks to Keith, ( who was also involved in setting up Dermots slides and video ), and of course to Dermot for his hard work. Now don't forget the first run of the year, meet at the Corn Dolly 1030 for a 1100 start on 13th March. Oh and whilst I have your attention, do please come to the AGM 17th March, we have a need for at least 2 more committee members, all the work to make the section successful does not just 'happen', hope to see you there.I have included a couple of photos from Matt who is keeping in touch. 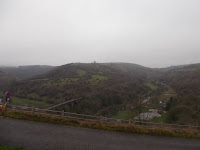 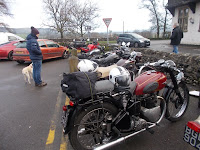