Despite the weather, the weather forecast, Fathers day and Covid restrictions, 7 intrepid riders turned up on Sunday for the Devon sections first run for the best part of a year. Ian and John had to ride through rain whereas the rest of us had to deal with low visibility which made it seem that we were riding through cloud!. Quince and the Rest and be Thankful were very understanding as I had originally booked for 15 to 20 and adjusted seating as we required, both venues were very Covid aware and served us at the table.

For the morning run, I led back through South Molton before turning off on the Rackenford road at Bish Mill, then it was a left to safely cross the A361 and head for Molland. It was just after Molland whilst climbing on to the lower moor that we first came across a poor misty outlook which spoilt the wonderful views we should have had such as my wife and I had enjoyed when proving the route the previous Tuesday. I was concerned that the fords at Exford and Winsford might be high due to the rain which had fallen the previous evening but when we came across them after Lanacre bridge, we found they were fine. I changed the route here to keep off the higher roads as this seemed to be where the mist was thick and so we arrived at the Rest and be Thankful from the main Minehead road all in one piece.

After a very nice meal, I decided the planned route over the top past Wimbleball was not on due again to the 'low cloud' so we headed back on the valley road to Exebrige then on to Oldways End before returning to Quince.

Thanks to Chris doing back marker duties and to all who turned up for the day, we are hoping to have a run on the 11th July and one on the 2nd Sunday in August, then we want to have an important and necessary AGM so keep tuned folks. 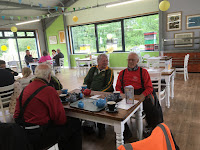 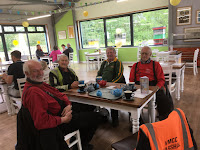 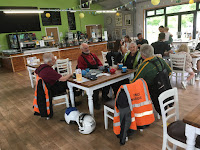 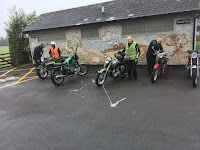