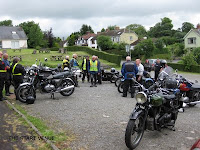 Eighteen riders set out on the Run from the start venue at Quinces Honey Farm, South Molton. We were pleased to see Mick Glossop who had travelled from Newquay on his very smart 1938 Royal Enfield model K V-twin. 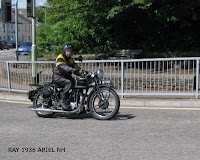 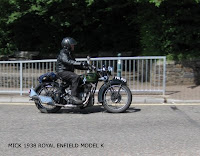 A little rain at the start soon cleared away as we made our way up on to Exmoor using the same route as the April Fool's run. This time we stopped at Malmsmead for coffee.

I say we stopped when in truth I mean the rest of the group, for I had a rear tyre puncture whilst crossing Brendon Common.
Mike Kidd lent me an inner tube and Brian Chidgey a pump, so I set about getting mobile again.
Unfortunately the pump failed to deliver air to the tyre, so I had to ring for assistance and was told I would receive help within 90 mins.
Just as I finished on the phone a kind Japanese Gentleman asked if I was in trouble. I explained my need for a pump. whereupon he produced an electric one and together we completed the repair in short order.
Then I had to settle down and await the breakdown wagon as the credit on my phone had expired and I had no way to cancel it. It arrived at 12.05, 90mins after the phone call.
From Malmsmead the route led to Brendon, then over the East Lyn river and up to the A39, then down Countisbury Hill to Lynmouth. Then a fairly fast section followed on A and B roads past Blackmoor Gate and Mullacott Cross leading down to the delightfully picturesque Lee Bay.

Everyone continued via back roads again to Morthoe with fine views of the coast, and down in to Woolacombe.Then on through Georgeham, Croyde, Saunton and Braunton, to Barnstaple and tea. 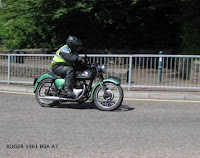 I believe everyone enjoyed the run but Gordon had some trouble with misfiring and had to return by a different route.
A big THANK YOU must go to Brenda who once again laid on a superb tea. 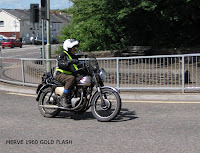