A wet week in Wales. 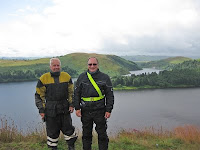 This rather wet little break was not an official Vintage Club event, but just something that came out of a discussion between Ray, Keith and myself.
The plan was to leave home on Tuesday morning, and ride to Builth Wells. Wednesday we would travel on to Betws-y-Coed and Thursday head back to Crickhowell. Friday would see us heading back home. The route was planned using the AA book of "Best
Drives-Britain" It promised to be a very scenic drive taking in lots of minor roads over the mountains of Mid and North Wales.
Our overnight stops were in B&B's sourced over the Internet. 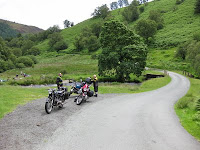 What we could not have forseen was the constant heavy rain which pretty much dogged the whole trip except for Wednesday afternoon. We had decided to avoid motorways where possible so opted for the A38 to reach Bristol and via Aust to the old Severn bridge where we stopped for lunch. The rain mostly held off then so we had a pleasant ride up the Wye valley to Monmouth. Then I missed a direction sign and we got a bit lost for a few miles but the scenery was nice so it wasn't too problematic. Then the rain started again. We arrived at Builth Wells in a thunderstorm after riding the last twenty miles in an absolute downpour. Our landlord very kindly allowed us the use of his garage to stow the bikes and hang up our wet kit.
On Wednesday the rain started to clear by mid morning and we had a good days riding with superb views from the high roads in the Cambrian Mountains. By the time we arrived at Betws-y-Coed the sun was out and my nose had got quite burnt.
Thursday morning we had the pleasure of riding on dry roads for the first five miles but as we started the climb to Blaenau Ffestiniog so the rain started again. So heavily in fact that we were forced to take shelter under some trees until the worst had past. Intermittent rain the whole day turned into a deluge for the final twenty miles. Ray said he had never before ridden in such heavy rain. Once again the landlord allowed us to use his garage and his good wife let us put our wet garments in her drying cupboard.
Despite the rain, which persisted the whole way home, we enjoyed the trip very much. The mountain roads, which carried little or no traffic, were most enjoyable with steep hills, sharp bends and sudden drops. The scenery, when you could take your eyes of the road, was magnificent.
We returned by way of the old Severn bridge and along the A38 to Taunton where Ray and Keith made for Tiverton and I headed for Bideford via the B3227. Just to round the trip off I had another puncture in the rear tyre as I approached Wivaliscombe. So my trip ended in the back of a breakdown van. I am pleased to say that Ray and Keith got home without further incident. I am still trying to dry out my gloves however!
Posted by Woody at Tuesday, July 21, 2009