In 1966 I found myself on an RAF Bristol Brittannia, ( whispering? Giant ), heading out on a 24 hour flight to a new posting to RAF Tengah in Singapore where I was to help run a microwave relay station, ( all very hush hush in those days ). The system was capable of carrying 1750 channels of military and diplomatic sensitive information which would be subject to easy sabotage if sent down landlines, anyway I digress so on with my story.
After a few days to get my feet under the table as it were, I headed to the local bike showroom ( hut ) to purchase a second hand machine. I naturally asked to see what Triumphs they had but was informed that British bikes were few and far between but they would put my name on a list should one turn up, meanwhile the owner felt sure I could find something in his stock to suit. A quick glance along the bikes stood up on the earth 'forecourt' revealed a mostly sorry state of motorcycle machinery, in fact there were only a few that I felt would suit. Of these, a Honda 175cc twin of 1963/4 era with pressed steel frame seemed most likely so I took it down the road for a trial and was pleasantly surprised, such that I returned and took the bike on. Clearly a 175cc Honda was not going to burn up a motorway but since Singapore boasted no more than I bit of dual carriageway I felt it would do me well.
The Honda did indeed do me well, I used it to travel all over Singapore island it being my only means of transport. I visited Singapore city a number of times, the Kranji war cemetery, they had English grass, Tiger balm gardens and a host of other places to many to mention.
I should have stuck with the Honda, but a year later I chopped it in for a Suzuki T10 which I thought would be faster and slicker on the uptake, it certainly looked more sporty and had such advanced features such as a hydraulic rear brake, but it seized a number of times when pushed, I would sit on the roadside for 20 mins or so then restart and set off again. I used the Suzuki to venture across the causeway into Malaya and journey through the rubber plantations and Kampongs to empty beaches for a swim and sunbathe. I travelled to the Cameron highlands and beyond, all very idyllic.
I became aware that my bike was 'rattling' or 'knocking' in the engine department, there being no facilities in my billet for engine stripping, I went to the bike shop to ask what they thought, I was pulled in for a cuppa and the malayan technicians set to work, in no time at all. The engine was out and stripped and I was shown a bent conrod!, I asked when they could get a spare but they just laughed and told me to go look around the shops for an hour or two. When I returned the bike was out for a test ride which after another cuppa was returned with a smile and a small bill, apparently much heating and hammering fixed the conrod!.
Since those days I have steered clear of 2 strokes and when offered one a few years ago I did not hesitate...no thank you.
I wonder if I'm still on the waiting list for a Triumph?. 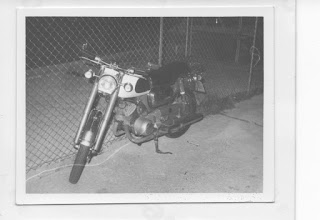 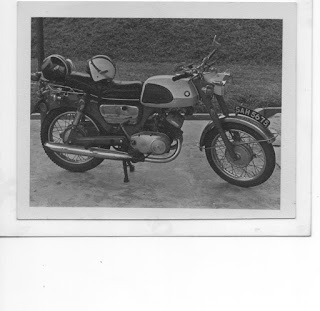