I Have added this article to The Blog in answer to Gordons request and in the hope that some of you may find it of interest. If you have any news, articles of interest or relevant opinions to express please email them to Gordon or me.
Chris

This is a copy of an article that I wrote for the VMCC detailing a trip to Finland that I made in 2000.

Finland had always been one of the countries that I had wanted to visit so when I saw the advert for the Veti Ralli in the club magazine I made some plans. A call to a member in Finland for more details and advice helped with the planning.
From a choice of routes I chose the ferry from Harwich to Hamburg then ride north to Copenhagen, over the Oresund bridge to Sweden, up to the Aland Islands and island hop across to Finland and north to the Rally site at Tampere.
Telephone calls to various Tourist offices produced camp site lists and a Swedish camping card was bought to cover camp site insurance. From large scale maps overnight stops were planned and a route avoiding motorways where possible chosen.
When departure day came in June the weather was fine and sunny. With an early start I was onto the A303 before there was much traffic about. Apart from the M25 the ride to Harwich was quite pleasant with no need to rush.
The 4 am sailing docks in Hamburg at 9 am. This was the bit that most worried me but a German motorcyclist kindly offered to lead through the city to the road running north. There was a long queue of cars waiting for the ferry at Puttgarten for the crossing to Denmark but motorcycles go right to front and are let straight on. The ferry takes about Fifty minutes and after travelling about twenty miles further I stopped for the night.
Avoiding motorways where possible I set out the next day for Copenhagen and the Oresund bridge to Malmo in Sweden. This bridge is the longest in Europe. The approach is via a 4km tunnel to an artificial island then up onto the bridge which is 8km in length and looks like the new Severn crossing at Bristol. The rest area on the Swedish side offers the usual services apart from petrol and a bank so a trip into Malmo was required.
The day was warm, sunny and the traffic light, and I reached the planned overnight stop early so kept on going. About 30kmfrom Vaxjo heavy rain set in making riding uncomfortable for a time but it cleared as I got to the site.
The next say started sunny again for the next leg to Katrineholm. A lot of the main roads in Sweden consist of a single lane with a hard shoulder on the right-hand side, the rule is that you drive in the left-hand lane and move onto the hard shoulder if something needs to pass you. As there is so little traffic this seams to work quite well. After lunch it began to rain, persistent, heavy, cold and very wet which began to seep in everywhere. At the camp site they thankfully had a cabin free, the first in three weeks apparently. It was not cheap as it slept four, but it was heated, had a cooker and fridge and the bed linen was provided. The site did have a restaurant which only served a sort of meatball stew as the main meal, a phenomenon I seemed to encounter everywhere I went. I phoned home in the evening and my wife told me that the television
news had shown pictures of flooding in central Sweden due to the heavy rain. 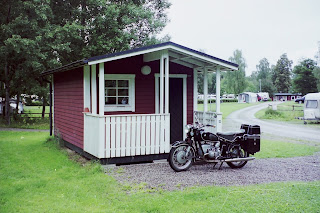 In the morning I did the daily checks of the bike and topped up with oil. My clothed had dried out overnight and the rain had eased off a bit. By the time I reached Grissleham ferry terminal the weather was perfect for the two hour crossing to Eckero on Aland. The price for the return trip was equivalent to £8. The passage has to be booked in a building adjacent to the car park before a ticket can be purchased from a kiosk on the quayside.
After lunch in the ships restaurant, meatballs again, I sat on deck in the sun as we passed though the Aland archipelago. The Alands comprise approximately 6000 islands, most of which are small rocky outcrops sporting a few stunted conifer trees. I met a group of Norwegian riders who advised me that the camp site in Mariehamn was a good one, which indeed it is. The facilities are excellent, even extending to under-floor heating in the shower block. I spent two very wet days there before riding to Hummelvik to board the ferry for the island of Brando. The Voyage takes two and a half hours and costs £2 for the bike, passengers go free. 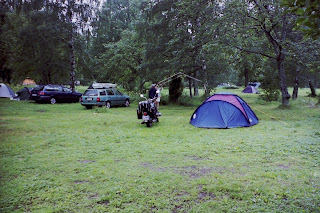 I am not generally fond of sea crossings but this one was moat enjoyable, with lots of sunshine and the sea as smooth as glass. The ship calls at several islands before reaching Brando which is why the voyage took so long.
Brando consists of more than one thousand small islands scattered around ten larger ones. Almost
all the islands are just above sea level and connected by causeways and low bridges, some of wooden construction. Most of the roads are just earth with, in places a scattering of chippings.  It's a beautiful place and I would have liked to have stayed longer.
At Brando Stugby (stugby means camp site with cabins to rent) the camping field was empty because it was a sea of mud. Inquiring at reception I was told that all of the cabins had been taken but that they had some vacancies at some new cabins further along the road. The cabins were indeed new, not yet having electricity or water connected but the location was marvelous, picturesque views over a rocky inlet towards the setting sun. 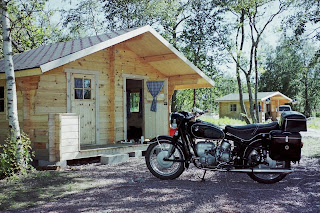 Walking along the by the rocky shore that evening I met a fisherman who was busy smoking the days catch in a large tin box. He told me he was from Sweden and that for the last fifty years he has been coming to Brando each summer to fish. He gave me a little of the smoked shoal bass that he had caught and told me how he thought that pollution was decimating the fish stocks.
Another ferry ride the following morning took me to the Finish mainland where I was relieved to find petrol, but disappointed to find that the weather had turned much colder. With a full tank and dressed more suitably I set off through increasing traffic to the Ralli site at Tampere.
The annual Veti Ralli is run by the Veteraanimootoripyoraklubi, and takes place each year in July at Camping Harmala which is close to the centre of Tampere. The site is ideal for such a gathering with spacious tenting areas and cabins for those requiring a bit more comfort. 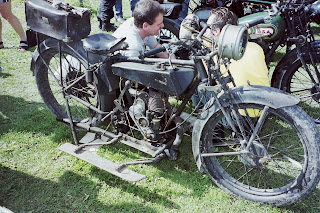 On Saturday morning most riders joined the parade though Tampere. Club officials helped the police to block off side roads so the dozens of motorcycles could make their way smoothly through the city centre. I was surprised to see so many members of the public lining the route. The parade ended in a heavily wooded park at a disused racing circuit. Regular racing ceased here years ago because of the closeness of the trees and spectators, but permission had been obtained to hold two races/parades for the benefit of the rally participants. A selection of British and European bikes from the Thirties to the seventies took part.
On Saturday afternoon went for a sauna in groups of about forty crammed into one very hot steamy room. Here I learned that by mixing beer with the water to be heated on the stones creates a very relaxing atmosphere. As and when we felt ready, singly or in groups we left the steam and walked down to the lake to swim, ignoring the public promenading near by. There were some interesting old bikes at the Rally many of which were flat tankers, some with skis fitted like stabilizers. Some of the BMW's like mine had red and white badges instead of blue and white. One owner told me that this was because they were made in the old East Germany.
After the Rally I stayed for a couple of says with some friends I new from the VMCC near Helsinki. Then it was time to head home back the way I had come. On reaching Sweden it started to rain again. To save time I rode to Stockholm and took the motorway south to Denmark, five hundred miles of the most boring road I have ever seen. There was very little traffic with nothing to look at but fir trees on either side of the road, with the occasional service station. I passed one man driving a van who was reading a magazine at the same time.
From Sweden I took the ferry from Helsingborg to Helsinger in Denmark just to try a different route. The traffic was heavy around Copenhagen but the sun came out and after camping near Koge I rode on the next day in sunshine to Travemunde in Germany where I stayed for four nights and visited the beautiful city of Lubeck.
Back in Hamburg in torrential rain I got lost. I had just stopped to find a dry place to read the map, when a young chap on a motorbike stopped to see if I was OK. He invited me up to his flat where he made out a list of the streets I needed to follow to get me back to the ferry. He spoke very little English but his help saved me a lot of trouble and I boarded my fourteenth ferry back to England.
Posted by Woody at Sunday, May 03, 2020