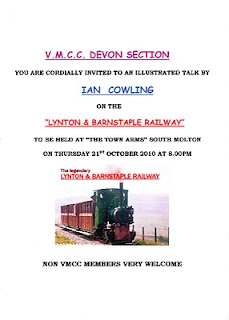 he next club night is on October 21st. We have a special speaker, Ian Cowling. He is coming to give us an illustrated talk on the Lynton & Barnstaple Railway. It should be very interesting as this is a very popular subject. We have opened the night to anyone interested in coming. So please make a special effort to attend & feel free to bring along as many friends as you like. The more the merrier, we want a really good turnout.
Posted by Woody at Thursday, October 14, 2010

Hi folks. Thanks to Clatters for the run report and photos. Here are some more pics that I took at the start of the run. Some of the photos I took came out too blurred to use as you chaps were going too fast for my camera to focus! 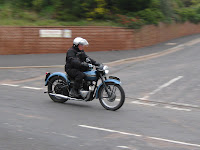 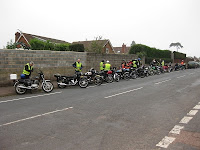 Many Congratulations to Rod, Brian and Lee on winning the awards. Also thanks to Brian Chidgey for planning the route and organising the Hoghway Code questions. 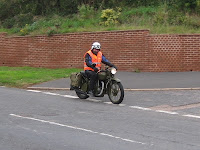 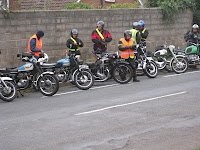 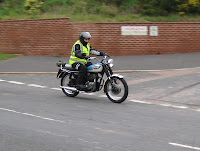 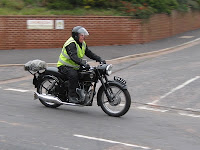 Ray is eager to hear from you to book your seats for the annual dinner. This year we are having it at the Town Arms in South Molton, there will be limited numbers so book early. Timing is 7pm for 7.30pm and the cost is £15, see you there folks.
Posted by Clatters at Sunday, October 10, 2010 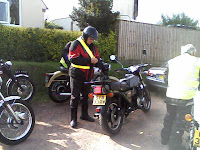 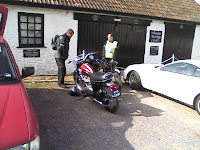 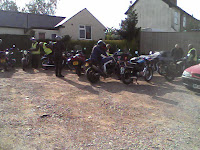 Despite a rather misty start, 21 riders, and one pillion, descended on Den and Sandras house to begin the day with a great egg, bacon or sausage bap, once again our thanks go to Den, Sandra and her helpers for this great start.

Brian had laid on a very enjoyable run, which this year was the same as last. Everyone was given a highway code questionaire, a route sheet and a voting slip to be completed at or before the mid day break.

The morning run took us through Bickleigh, Silverton, Broadclyst and on to Whimple, there was little for Ray and Gordon to do as rear marshals until about 50 yards from the lunchtime pub where Dens cub had to finish the ride with a push. The fault was a loose carb and we thought all was well.

Shirley waved her wand over the questionaires which led to Gordon and Rodney Hann having to complete another set of questions which Rod won, ( ex Police so he ought to didn't he ). The voting slips revealed that Lee won the girder vote on Charlies AJS and Brian Codey won the tele vote on his Bonnie, well done to you three.

The afternoon run lasted only a couple of hundred yards for Den, who elected to wait for pick up to home. Lee had a couple of minor hiccups but Charlie would have been proud how he got going again.

We all then finished up on Exmouth sea front for an ice cream drawing quite a lot of interest from passers by, it was nice to see Ken Alsop come down to see us all.

Lets see you at Sandra and Dens in Crediton this Sunday for this years Autumn run, good weather has been laid on and a mouthful of bacon will set you off to a great start, its always a good run organised by Brian so fire up the bike, see you there.
Posted by Clatters at Thursday, October 07, 2010