Six riders who were foolish enough to believe the weather forcasters when they said that Sunday would be " dry with the slight chance of a shower" met at J27 on Sunday Sept. 25th at 9.30am. 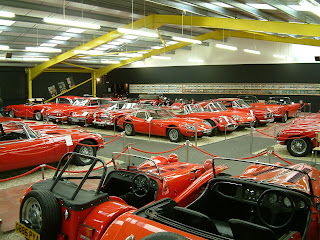 The plan was to meet with some members from the Somerset section for a trip to The Haynes Motor Museum at Sparkford. http://www.haynesmotormuseum.com/
One of the Somerset boys had bike trouble on the way so it was arranged to meet them at the destination.
We set off in good spirits because Ray had told us that the present rain was a "clearing-up" shower. Then we made our way through persistant rain over the Blackdown Hills to Sparkford.
Arriving in the car park, in rain that was now nearly horizontal in the strong wind, we were met by one member from Somerset. The others, about ten in all came in shortly after. 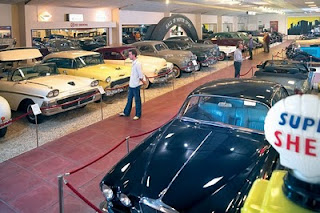 There are a geat many interesting and exotic cars and bikes on display in the museum all in beautiful
condition. I would like to have stayed longer but with my feet squelching about in my boots and a hundred mile ride home we left after about two hours.
The ride home was achieved in the dry but with a strong wind blowing in our faces.
Thanks to Ray for guiding us which he is good at, but don't listen to his weather predictions, which he is rubbish at!
Posted by Woody at Monday, September 26, 2011

Thanks to Mick for a well thought out quiz for the evening, unfortunately only 14 people attended but there was a good time had by all. Now next month, Merv is coming all the way up from Cornwall to give us a presentation, so please can we have a good turn out for that?, it's on October 20th. see you there.
Posted by Clatters at Saturday, September 17, 2011

Woody and I were unavailable for this run but I have had briefings from Ray and Merv so here's how it went. 14 riders set off from the railway station at Okehampton on a day that was supposed to have very bad weather but turned out to be quite good. Ian led the group around the back of Launceston to arrive at Daidstowe by about 11.20, the drop off system was used as the run could get quite strung out. Nice to see Alan in the Morgan again and a rider on his first run with the club, John from Bude on his Suzuki. 8 Cornish riders were waiting at the Museum and a cuppa and biscuits were enjoyed following a quick tour of a very interesting Museum. All 23 set off on a nice rural trip around Bodmin moor past Crowdy etc to arrive at the lunch stop at Otterham cafe, after a good meal everyone set off on their own way home. The only rain was during the lunch stop so this did not affect anyone too much. Keith had to ride his Bonnie as his T100 wouldn't run properley but I am told it is now ok. If anyone can E mail me photos I will post them seperately. Ray has asked me to thank Merv for organising the Cornish end of the run and Ian for leading the group to Davidstowe. Next run is the Autumn run from Sandra and Den's on October 9th, hope to see you there.
Posted by Clatters at Saturday, September 17, 2011