An additional photo has come to light for Andy's run. 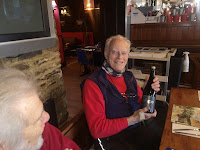 At the beginning of this year, it seemed unlikely that our section would have many runs to enjoy, what a pleasant surprise it is that I am reporting on the last of a full calendar of runs for 2021, and what better to report than Andy's Frosty finger run. It was decided that this should be a midweek run and Andy kindly agreed to organise it. A new venue to us was chosen which was the Quay cafe at Braunton, and 9 riders braved the cold to turn up. I must say that the weather was promised to be sort of ok though some of us had a damp start and mucky run. After a briefing from Andy which included warnings of short and narrow hump back bridges, and with Chris and I on marshal duties, the run set off on time turning right on to a lane which ran over a fen like area with swans, streams oh and yes, the hump backed bridges. Pretty soon we came out on to the Saunton road and on to Croyde, Woolacombe, Morthoe and Georgeham, a very nice ride along the coast which was probably better at that time of the week as I am sure it would have been much busier had we tried the run on a weekend. Doug's Ariel decided to have a rest above Woolacombe but was giving a talking to and restarted ok, other than that, I am pleased to report that there were no further episodes.

The run ended at Blackmoor gate where 6 of us partook of a good chatter and a meal, Andy had promised a prize for the rider who had travelled the furthest and that proved to be your truly so I accepted a bottle of 'bubbly' but unlike Lewis Hamilton, I declined the need to shake it up and spray it over my fellow riders!. 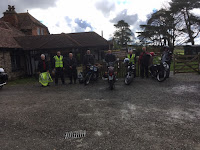 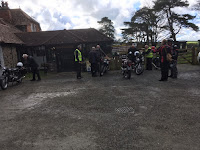 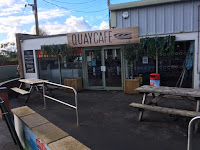 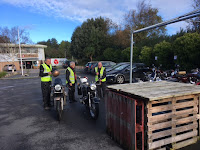 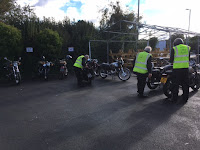 As I don't have panniers, Chris offered to take it home to his place and bring it next club night, just a bit concerned that he may have been thirsty on the way home!.

Thanks to Andy for a lovely run and thanks to everyone who have organised and lead runs this year, if you would like to sort one for 2022, please let one of us know before the 16th as we are planning for next year.