On an excellent evening, ( unusual for most of our runs this year so far! ), 11 riders sat around 2 tables in the garden of the Anchor inn Exebridge to partake of a thirstquencher, good company and very interesting conversations, Firstly, Dermot gave, by example, a lesson in diplomacy toward Harley owners, thereafter the talk was wide ranging and instructive leading to a very enjoyable evening, the smiles of the folks gathered will give proof of this. My quality Triumph hat appears to have come to the attention of at least 2 persons attending and I had to be sure to hang on to it all evening and I will ensure I bring it again. Next run will be on August 14th starting from Holwill junction, I'm told there will be directions from the village centre, hope to see you there folks.

NEWS OF THE UNIVERSE 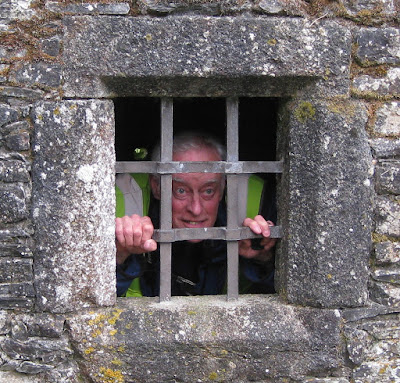 To-day NEWS OF THE UNIVERSE can reveal that Cutthroat Clatworthy is once more behind bars after being on the run for almost a year. Cuttthroat Clatworthy, who escaped custody with the aid of two other notorious villains, Razar Rowcliffe and Cosher Cleeve, was serving a life sentence for numerous crimes. These crimes included the wearing of headgear likely to result in a breach of the peace and the insulting of riders of single cylinder machines.
Witnesses testifying at his trial said that he had boasted that 'flies are attracted to me'. Is it any wonder when he wears such a vile smelly rag on his head?
NEWS OF THE UNIVERSE under-cover investigators have discovered that Cutthroat who's real name is Gordon has a twin sister.
This sister out of some misguided sense of loyalty has taken it upon herself to impersonate her loathsome brother and to try and bring some respectability to the Clatworthy name.
She now wears his clothes and frequents the same places where his crimes were committed. If you should happen, dear readers, to meet the sister in this disguise, do not be fooled, you are not talking to a man but a woman. Smile sympathetically and call her Christine.
Posted by Woody at Tuesday, July 19, 2016

17 riders turned up at the Bickleigh mill for Keiths Deepest Devon run, now let me clear up a point here, this was not Keith trying to get us to the point in Devon which is nearest to Ayres' rock in Australia but rather that we should see some of the tucked away and rural places in the county!. The weather for the day was promissed to be mainly dry with some showers around midday and this proved to be the case though nowhere near as many showers as we thought. As Mike was incapacitated due to damaging his knee ( get well soon Mike ), Chris did the signing on honours and Keith lead us away on time after the usual briefing with Chris and myself doing the honours at the rear. The route was back through Tiverton and out towards Butterleigh and Silverton with some lovely views on the way, then on to Thorverton, here we were lead on toward Stockleigh Pomeroy and Cheriton Fitzpaine where 4 of our number decided to do an unauthorised breakaway which meant that I had to leave Chris on his own at the back whilst I chased after them, three were successfully recovered and taken to the mid day stop by a different route, Dermot was seen going North and it was presumed he was continuing the run via Ilfracombe!, all eventually turned up at the Mount Pleasant Inn in Nomansland where we were well looked after. There was a shower of rain whilst we were in the Inn but it had stopped before we set off toward Rackenford, the rest of the afternoon saw us wend our way through some picturesque areas of Devon near to Molland, Knowstone, Anstey and Bishops Nympton before arriving back at the Corn Dolly in South Molton for a well eaned cuppa prior to the run home. It just remains to thank all those who came, some from a distance, to participate and to thank Keith for a very enjoyable run, now don't forget the evening run next Monday, ( July 18th ),to the Anchor at Exebridge, around 7pm, see you there.