Everyone was very pleased that the recent fine spell of weather lasted through to this run, which for most of our riders started a long way from home.
Watchet car park was the start venue for the run, it also doubles as a Station car park on the West Somerset Railway, an old branch line of the Great Western Railway with some great historic steam locomotives. http://www.west-somerset-railway.co.uk
We were pleased to be joined on the run by Rod and Carol Hann from Dorset, and by Chris and Carol Tiso from Somerset.
Keith led the ride through the lanes and over the hills and dales of West Somerset's very picturesque countryside. This part of the country has many pretty villages with facinating names such as Chapel Leigh, Fitzhead and Huish Campflower.
The lunch stop was at The Raleghs Cross Inn, at Brendon Hill, where they served us an excellent Carvery lunch. http://raleghscross.co.uk/
The afternoon route took us on some faster roads with splendid Devon/Somerset views of Exmoor, though Winsford and Withypool and on to South Molton where we had tea at the Corn Dolly Cafe. Always a treat! 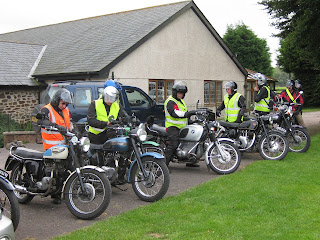 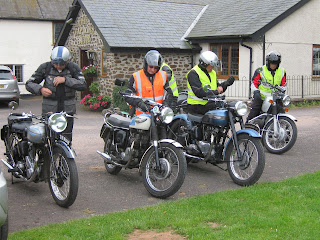 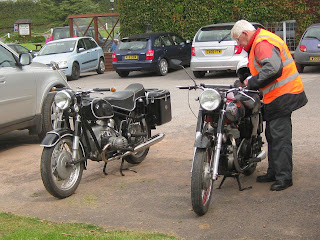 Thanks Keith, it was a splendid day out.
Posted by Woody at Wednesday, September 12, 2012