I may have a certificate coming as today I actually started Ray's Ariel!. 8 other riders saw this happen, we started at Ray's in what was promised to be a warmish dry day, 2 riders had to tour Tiverton to find us but all was well and we were away just after 11am. Ray was leading on his Matchless and Brian agreed to do back marker duty. We were led out of Tiverton on the road to Witheridge but turned off to Thelbridge just before. We turned right in Black Dog to Morchard Bishop then across the A377 headed for Bow. From Bow we passed through Spreyton then on to Whiddon Down and to the lunch stop at Moretonhampstead. After a great lunch during which there was a shower of rain!!, we headed back to the finish in Exeter via Doccombe, Dunsford and Longdown, where a cuppa was enjoyed at the Cowick Barton. Well done to Tony who's Vin was voted for by the pub, also thanks to Ray for a great run and for letting me loose on his Ariel also to Brian at the back, everyone enjoyed the day, no breakdowns just a loose mirror, see you at Bickleigh mill on 8th September for an 11am start.

I couldn't attend this event for family reasons but Ray has kindly given me a report and Chris has promised to provide some photo's. About 20 riders turned up for the event at the Black Cat where refreshments were once again very kindly provided by Fred and Ruth before the start. Most unusually for a Triumph!, Keith's refused to start and after much trying, Ray agreed to lead the  run, Cyril agreed to remain behind to see if the bike could be persuaded to burst into life, this apparently did not happen so Cyril had to return with a trailer for a lift home. All went well with the run until on passing the Blue Ball, the next turning showed a blocked road, Ray carried on hoping to make a left and return on route but all roads heading in the direction proved to also be blocked, when the run was obviously going to end in a farm yard, the decision was made to reverse the route to Wellington and take the road to the Monument and get back on course, this worked fine and all riders turned up at the Barley Mow farm shop for an excellent lunch. The run left at 1350 but there was a slip up when some riders set off in the wrong direction, so a wait was put in place at worlds end for a catch up and fuel, no-one seems to have been bothered as it was a fine day and there were no additional hiccups partly because the markers stayed at their posts so well done folks. The run finished back at the Blackberries at about 1600. Keith tells me that he has not yet had time to sort out the Triumph but I will keep you posted, thanks to Ray for stepping in to lead and to Chris and Ian for bringing up the rear. There has been no take up to my request for leading the September run so I will endeavour to work one out, meet up at the Bickleigh mill near Tiverton on 8th September, see you there 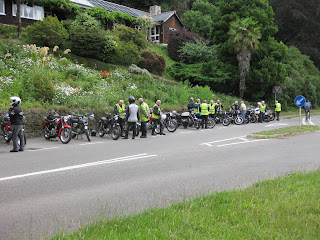 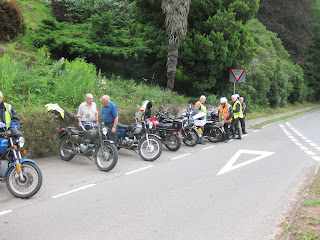 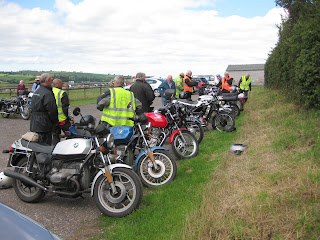 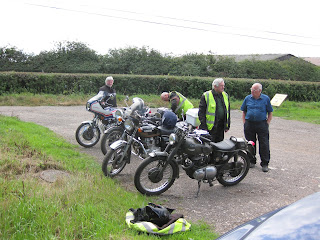 The Welcome Fryer lived up to it's name and made 14 of us welcome for this evening meet, 12 came by car but Steve and I turned out on bikes for what turned out to be a lovely evening to ride. The meal was excellent and the service superb, well done to the staff. A good meal was enjoyed and a good evening of socialising for those present, I'm not sure why more don't turn out for this event but we will keep putting it on the calendar. This event was the last official engagement for our Chairman Mick who has had to resign due to moving down south to improve the GPO telegram service in Dartmouth!!, we all hope you find your new home to your liking Mick and hope to see you from time to time.
Posted by Clatters at Friday, August 16, 2013