The sections annual dinner was held at the Tiverton Hotel at lunchtime on Saturday 7th December and was a great success, 37 attended for a full Christmas dinner with all the trimmings, there was a problem with the 'WEE' balloons as the puff from many of the assembled attendees proved too much for them and so they burst before they could be launched across the room!, perhaps I should say that this was a ploy to try to introduce a little decorum to the proceedings!!.
A very expensive clock was wrapped and placed on each table, then the people at the table were asked to guess the time on the clock, the winner was the person who got nearest to the time indicated when the clock was unwrapped. I was caught out when someone said they had seen identical clocks for sale in the local cheap shop!...ah well times is hard you know.
Mick gave a short speech as he was the elected Chairman for the year but had had to resign following his move to Dartmouth, I then talked a little of the rest of the year.
Matt then moved to give out the trophies for the year they were: Jeans trophy, ( most pre war points ), to Tony Petherick. VMCC post war cup went to Keith Cleeve our treasurer who was home recovering from a knee replacement. Les Soper tankard for a foreign machine was won by our very own Chris Wood on his BMW. The Thelbridge trophy for best girder fork on the autumn run went to Tony Petherick. Reeds motors best tele fork went to Tony Box who was very pleased to receive it and thanked the section with a little speech of his own. Finally, the Woodman family shield highway code was won by Mick Addison.
The December club night went very well with Ray setting us one of his very taxing quiz's which was won by Chris, ( must have learnt a lot whilst fixing his BM ). Mince pies and coffee was enjoyed by all attending, another very good night.
Well readers, here we are on the threshold of another year, the committee are going to run the film ' the worlds fastest Indian' on Januarys club night so do come along, ( no I wont be selling ice creams at half time! ).
Here is the programme for 2014 for anyone who doesn't get out much, next run is Sunday January 5th at the Corn Dolly so come along, Happy New Year to you all. 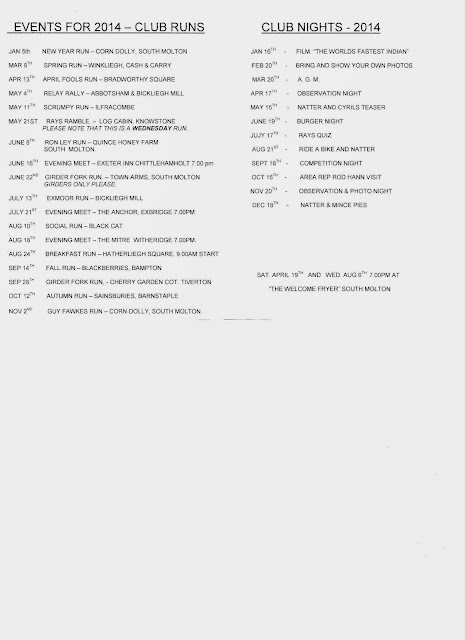