The winner of the Mayor's Choice award, Maurice Ley's Sunbeam 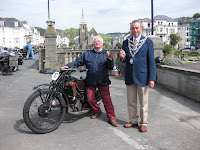 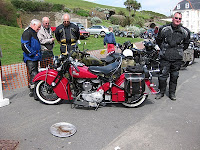 Richard Gardiner with his Indian Chief which won the Riders Choice award. 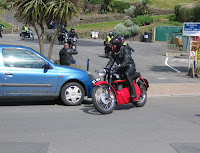 At 9.00am on Ilfracombe Sea Front with grey skies and a cold strong cold wind blowing from the north, the probability of a poor turn-out looked likely.
But the expectation was wrong. Fifty riders signed-on and the weather improved greatly with long spells of sunshine in the afternoon.
There was only one breakdown that I know of, when one of the gentlemen from Dorset's battery expired.
Maurice Ley once again arranged the route which differed from that used last year with a longer run in the morning. This proved to be very popular with many favourable comments passed both to Maurice and to me.
It was pleasing to see entrants from Somerset, Dorset, Cornwall and Devon riding in what has become a very popular run, taking in as it does, some of the finest scenery in the South West.
John Morey won the " Oldest Bike and Rider" award with his 1928 Scott.
The "Rider's Choice of Machine" award went to Richard Gardiner for his lovely Indian Chief.
We were pleased to welcome the Mayor of Ilfracambe Mr Philip Webb and his wife, who picked the 1935 Sunbeam of Maurice Ley for his "Mayors Choice of Machine" award.
The "Guest's Choice" Award, chosen this year by John Brunyee, was also awarded to Maurice.
My thanks go to Martyn and Gordon for supplying some of the pictures.
Posted by Woody at Tuesday, May 11, 2010