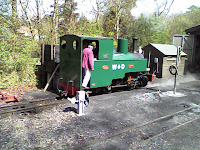 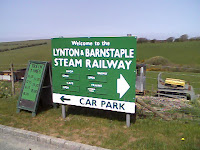 Sundays April fools run saw 27 riders arrive at the Corn Dolly in South Molton in good weather for a very good run over parts of Exmoor and North Devon to arrive at the Woody Bay station for lunch and dispersal.


This run was as usual organised by John Denny, and of course there was a ford to be navigated, ( only one this time ), one rider stopped in the ford which, considering the depth in the middle, was quite surprising.


Brian and Lee brought up the rear, this was Lee's first time in the role, they had a little work to do but not to onerous.


Many riders admitted they had seen parts of the moor they had not seen before, I must admit that this was my observation also, even Merv had not been on some of the lanes.


The run finished at Woody bay station so that riders could take advantage of the train ride if they wanted, John rightly felt that this stop would be in support of the railway following the excellent talk given recently at our club night.
All in all a very enjoyable run, thanks to John for the route and for leading, and to Brian and Lee for bringing up the rear.