The committee were on site before 0900 to set up for the annual Scrumpy run, it wasn't long before the first riders were coming in. The weather was good, and 34 riders signed on, although everyone agrees there did seem to be more bikes on the site. Dick and Keith set off to mark the turn into shute lane and to take photos, then Maurice led the riders out for the run. It was great to see riders from the Cotswold, Cornwall and Dorset sections enjoying the day.
Only one minor mishap was reported to the Marshals which resulted in a rider cutting off home with back brake only. Lunch was taken at Countisbury as usual and riders began arriving back from 14.00.
The Mayor arrived to vote for his choice and to make the presentations at 15.00, they were: John Morey oldest combined age of bike and rider, Tony Petherick
took the entrants choice, Mike Dickson was the Mayors choice and Dave Barkshire best machine voted by guest, sandwiches were laid on by the Ilfracombe council and enjoyed by all.
Thanks must go to Maurice for the run and to the committee who have to set up the site and police it through the day before stripping it all out at days end. 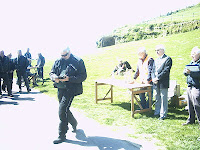 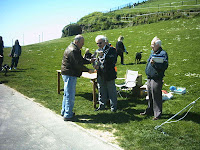 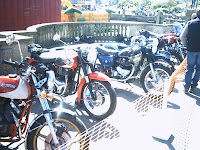