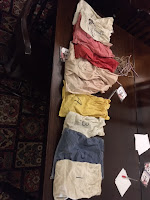 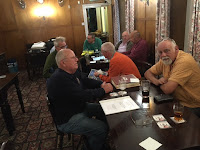 Great club night, Chris brought photos of the baton relay rally and Devon sections involvement and Maurice brought a few albums of the many, many bikes he has owned over the years, seems like everything from a Ninja to a 1920's Sunbeam, some he admitted were more successful than others!.

I took in the competition bags which were handed back to me by Steve who's turn it was to fill them this year except that he has stood down from his involvement at the moment. I had filled them with what I thought were fairly easy to guess items but in the event the highest score was a tie between Andy and Nick so a quick 'which hand is it in' gave the win to Nick who has to do the honours next year.

There will be a run on the 10th October which Chris will organise and I will do a short run in November date to be announced, ( we are wondering about a midweek run? ).

Posted by Clatters at Saturday, September 18, 2021