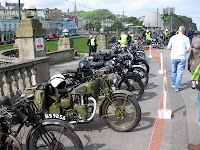 The Weather Gods were kind to us this year when they provided an abundance of sunshine for Devon's annual Scrumpy Run. Over sixty riders signed on for a days motorcycling on Exmoor.


Soon after 9am bikes began arriving at Ilfracombe sea front where they lined up to await the 11am start. They were much admired by delighted holiday makers and locals, many of whom welcomed the chance to talk to the owners and take photographs.

From Ilfracombe the route took the riders to Coombe Martin and the dreaded Shoot Lane which leads steeply up to Knap Down and on to Stony Corner where a left turn led them across Trentishoe Down. Then came Hunter's Inn and the second 1 in 4 climb up to Martinhoe for the ride through the woods at Woody Bay and the Lee Abbey toll road. On through the beautiful Valley of the Rocks and down from Lynton to Lynmouth. The next 1 in 4 hill out of Lynmouth is Countisbury, at the top of which the Blue Ball Inn provided a welcome break for lunch.

After lunch the route took the riders through more fabulous Exmoor scenery before returning to Ilfracombe sea front. Here the bikes were lined up once more to await the presentation of awards by the Mayor of Ilfracombe.

Steve Griffen collected two awards for his eye catching 1950 BSA B31, one as the entrants choice and one as the choice of a special guest, this year it was Carol Hann. Rodney Han is the Club's area rep.

The "Mayors Choice of Machine" award went to 92 year old John Brunyee with his Cammy Velo.

85 year old Charlie Plain took the award for the "Highest Combined Age of Bike and Rider" with his 1926 AJS.

And yes they did both complete the run on their bikes!

Our thanks is due to the Committee for all the work entailed in organising this great day out.

The pictures show some of the riders leaving and returning to Ilfracombe. Also, the Mayor presenting Charlie and John 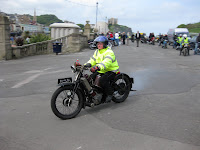 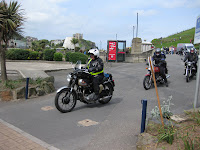 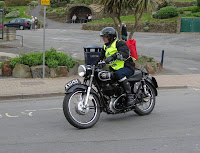 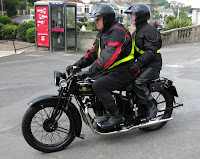 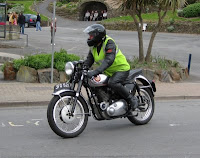 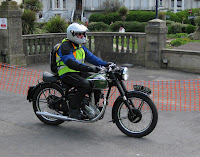 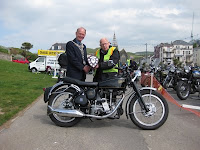 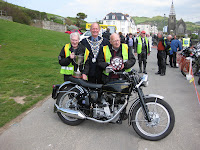