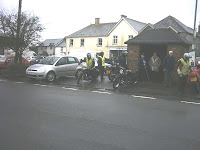 15 riders braved the weather and arrived at Bradworthy square last Sunday for the April fools run, here we were met by a number of interested people weilding cameras and wishing us well. The bus shelter in the square came in handy until we all trooped into the coffee shop which Chris had used fluttering eyes on the owner to open for us ( she opened anyway ). there was one failure at the start and nearly another when Rays Ariel declared that it was not going any further in the rain!, however, after a push, Ray was away. The route took us back to Holsworthy then we headed towards Launceston, the rain was gradually less and we were pleased for this. We were then taken on through North Tamerton, 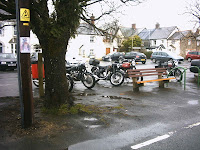 Polson, Lifton and Tinhay before turning off to Chillaton and on to Tavistock, here unfortunately, Tony's Scott decided it had had enough and just stopped. Tony and I spent some time going through all the checks and adjustments before the fault was found, although a temporary fix was found it did not last and I had to leave Tony calling for pick up.
After an excellent lunch at the Dartmoor Inn, the run continued through Two Bridges and Chagford ,where the rain came on again, before coming to the end of the run at Whiddon down services.
Thanks to Chris for the route which was a cracking ride, to the back marshals and everyone for marking junctions correctly.