Many of you will, I'm sure, remember my cousin Merv who has been a great supporter of the Devon section since I came back to motorbikes and joined the Devon section some nearly 30 years ago, well sadly I must tell you that Merv lost his long fight against cancer last week and passed away aged 79. I have hung on to writing this post until I had the details of his funeral which I now have. It will be at 12.30 on Tuesday the 19th September at the Glyn valley crematorium in Bodmin. Flowers are restricted to family only with donations being invited for the Little Harbour childrens hospice. There is to be a bike parade following the hearse starting at a Slade house in Wadebridge at 11.00, I think Ian B knows where this is. Merv was a prolific picture taker and you may have seen or been given photos taken by him, usually at times of a breakdown!. In his riding days, he brought many riders with him from Cornwall to the Scrumpy run, the Exmoor run and many others. R I P Merv. 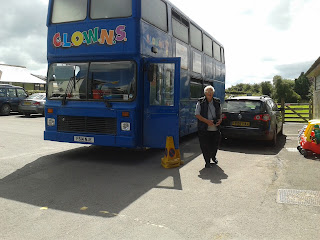 Posted by Clatters at Wednesday, September 13, 2017